About Our Music Director 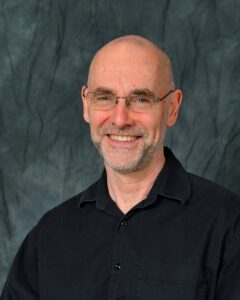 Doug Manning has been our music director since 2002.  His first training in instrumental music began at Milneford Junior High School, where, because his arms were too short, he was taken off trombone and given the tuba. This watershed event marked the beginning of a long and happy relationship with bands and orchestras. Doug’s studies continued at the University of Toronto, where he studied conducting under Victor Feldbrill and received his Bachelor of Music and Bachelor of Education degrees.
In 1979, he began his teaching career as an Itinerant Music Instructor for Toronto Board of Education, and then came to York Region District School Board in 1990. He retired in 2007 as Head of Music at Woodbridge College.
Over the past twenty five years, Doug was Music Director for many groups, including Whitby Junior Brass Band, Chinguacousy Concert Band, Pickering Community Concert Band, and Unionville Theatre Company, and has served as an adjudicator for York Region’s Music Alive festival. He has been Music Director for Markham Concert Band since 2002.
Doug has received the Conducting Excellence Award from the Ontario Band Association, and two Theas from the Association of Community Theatres- Central Ontario. He has been hard at work studying Japanese since marrying Yuki in 2017. Their son Akito, born in 2019, loves music, cars and Hallowe’en.
COVID isolation sparked a renewed interest in Dungeons and Dragons, and he now leads the weekly MCB D&D game.

Want to support the Band?

Want to sponsor us?

Would your business like to sponsor us and promote yourself at the same time? Check out the options available here.

We send out six newsletters a year  to let you know what fun and exciting things we’ll be performing for you.  Sign up here.